Canucks continue their roll over the Wild

Share All sharing options for: Canucks continue their roll over the Wild 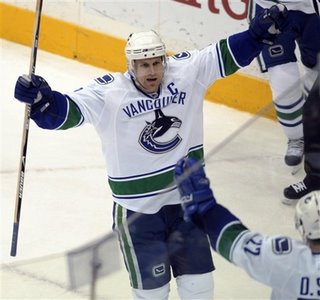 Sure, I called this game to a T, but it doesn't matter. What really matters is that the Canucks are playing with a vengeance and are giving us sure signs that this team will make the playoffs. When Belanger scored the go ahead goal for Minnesota there was panic in CanuckLand I'm sure. But the Canucks kept pressing and once again tied the game in Naslundian fashion on the power play, only to set up a 3-way Swede play in OT to bury the Wild.
To me, right now, after the bloodbath in Edmonton, I'm not suprised the Canucks are winning again. They are showing no signs of quitting and really haven't shown that even in their losing skid. These guys believe in eachother and it's very evident on the ice.
It's comforting to know that when the Sedins show up on the scoreboard, we tend to win. It's not comforting to realize that when teams shut these guys down, we lose.
That's all I got to say about that. Nonis needs to acquire some help with secondary scoring, or the current bunch behind the Sedins needs to provide secondary scoring more often.
Speaking of....good to see Cooke bag one. It's about fucking time, Cookie.

Don't look now, but the Canucks are moving up the Western Conference standings. Ooo yeah! Dig it! 7th spot muthafuckas!

Bottom line though, does any part of this game compare to the comeback by Montreal over the Rangers tonight? Not a damned chance. That's just sick. Not many teams win after being down 5-0.