Canucks beat the Oilers in a backstreet brawl

Share All sharing options for: Canucks beat the Oilers in a backstreet brawl 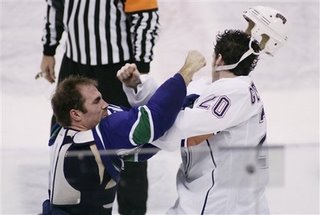 I turned on the tv to watch a fight and a hockey game broke out. I didn't know there was so much animosity between these 2 teams but it was quite evident as soon as the puck dropped. Ritchie and Apeman Stortini were jawing at eachother before the initial faceoff already. They were sent to the penalty box 11 seconds in for unsportsmanlike conduct. Probably an effort by the refs to squash any outbreaks. Well it didn't work. Within the first 21 seconds of the game, two 10 minute majors were handed out (Penner and Burrows) and 5 minor penalties.
The violence somewhat subsided eventually, and the Canucks played a solid game. They played it their way: never trailing on the scoreboard, and for the most part, tight defensively. The Oilers are a gritty fast team, and they came at Vancouver all night, but I thought the Canucks showed a lot of composure. And the camaraderie factor applied again for the Canucks. They stuck up for eachother. That was very evident in the last minute of the game right after Burrows scored the empty net goal. That last minute of play must have taken half an hour to get through, as the violence ensued, and the Oilers were a beaten team. All combined, 5 minors, 10 fighting majors, and 6 ten-minute misconducts were handed out in the last minute of the game. Great old-time hockey tonight.
The brawls overshadowed the bottom line though: that the Canucks are back in a playoff spot after tonight's win. The turning point? Tom Gilbert's blind pass to the middle of the ice in his own zone where the Swedish trio intercepted it and made him pay. That was the 3-2 goal. It's about time the Sedins and Naslund got it going offensively. They combined for 7 points. When they score, we win. I noticed the Oilers didn't smother them as much as other teams do. The twins and Naslund had a lot more space as the Oils play a more wide-open style. Yet, Burrows and Kesler played Ales Hemsky and the rest of the Oilers' top line hard, and kept them off the scoresheet. 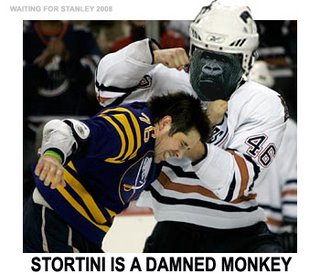 I hate Zach Stortini. He looks like a fucking ape or a neanderthal. But hey, at least he can get things done offensively as well as be a goon. I believe it was Stortini that took out Pyatt early in the game. Pyatt looked like he sustained a shoulder injury as Stortini hammered him into the boards. Not sure of Taylor's status yet. Apparently it will be revealed on Monday.
As a side note, I gotta say, I really have been impressed with the play of Mike Weaver. Normally the 7th defenceman (I believe), Weaver has stepped in with all the Canucks' injuries at the back end and performed admirably. He's not flashy, and doesn't put up a lot of points (0 this year), but he plays defence with Willie Mitchell-like stability and is very reliable.
It was amazing to see the normally behind-the-scenes Weaver drop the gloves with Glencross tonight and put up a great tilt.