Share All sharing options for: Canucks beat the Hawks in unconvincing fashion 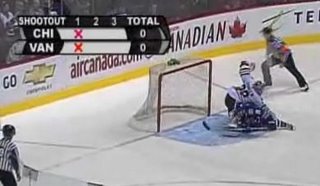 I watched the game with Temujin tonight and he described this game best: basically a roller coaster of emotions all the way through. From Burrows' breakway goal to make it 1-0, to Cam Barker's blooper reel flutter goal, to Dank's penalty shot miss in OT, to Ryan Shannon's beauty shootout spin-a-roonie goal this game had it all. Major physical game as well.
It didn't matter how we got it done I guess. Vancouver got the much-needed 2 points to keep up with Nashville for the final playoff spot.
One question I have is: should Shannon's shootout goal really have counted? Sure, the puck kept moving forward, but he basically crashed into Khabibulin before stuffing the puck in. You could see Lidstrom's potential tying goal against Anaheim not count tonight because Holmstrom brushed against Giguere. Well...what's the difference here?
Remember the last time Shannon attempted that type of shootout move?


We'll take it. But I'm still not content with how the Canucks got the job done.
I will sing the praises of Captain Markus now after mocking him pregame. I thought he played superb tonight, like he was on a mission. His tying goal was just sick. Great hand-eye coordination. Nice double pump after the goal too. Good to see Nazzy show some emotion out there.