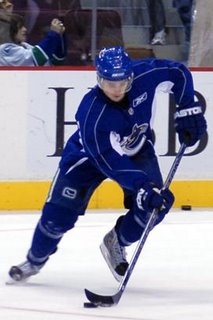 Bad news for the Canucks tonight on this Hockey Day in Canada: Paul Stastny is expected to return to the Avs' lineup after missing 9 games with an appendectomy. The good news for the Canucks is that Ryan Shannon will get another crack at it with the Nucks while Jeff "Bra-less" Cowan will be a healthy scratch....FINALLY! Shannon was sent back down to Manitoba early in the Canucks' season, and suffered an MCL injury that kept him out of action until recently. He has 1 goal and 7 assists with the Moose in his last 11 games. Canucks.com is reporting that Shannon will play alongside Mason Raymond and Jason Jaffray as an energy line. Hopefully they can contribute on the scoreboard. I like this move by Vigneault.
More positive news for the Nucks is that Mattias Ohlund was great in his return in their 2-1 win over the Thrashers last game. Ohlund is a vital part of the blueline and it's good to have him back.
As for the Avs, they keep having success regardless of the fact that Ryan Smyth, Joe Sakic and Paul Stastny are/were not in the lineup. Amazing.
But the bottom line tonight is that Vancouver has the gun to their head. They have to win. I see Calgary is already beating Edmonton tonight. A loss by us and win by Calgary would put us 3 points behind them. A loss in regulation to the Avs tonight would put them 4 points ahead of us. And we can scoreboard watch tonight even more as the Predators take on the Sharks. A win by the Preds puts them 3 points ahead of us as well. A loss by us and a win by the Northwest Division-leading Minnesota Wild tonight will put the Wild 5 points ahead of us.
So yeah. No time like right now to start a winning streak. I say the Nucks take this one 4-2. 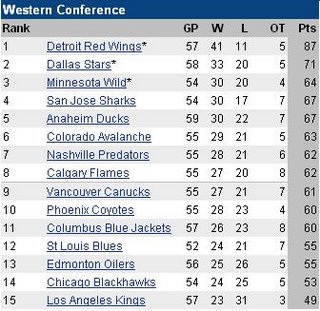 Sweet Jeeziz, can you believe how much better the Sens are with the Spezza-Heatley-Alfredsson line back in tact? Those 3 took the fun right out of that game, as did Christy Huet for that matter.