Canucks 3 Preds 2: I wanna kill me a Sedin

Share All sharing options for: Canucks 3 Preds 2: I wanna kill me a Sedin 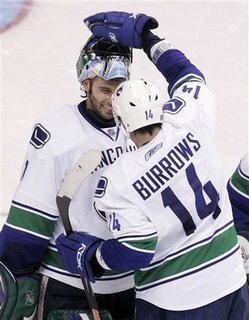 Yes, I want to kill me a Sedin....and make sweet man-love to Roberto Luongo. Ha! I kid. But really, I must have uttered about 1000 obscenties towards the twins tonight. They stank it up on the ice badly, not scoring anything, but taking stupid penalties at wrong times. Bastards. I'm still mad. Hank Sedin took a high sticking penalty in the 3rd that led to the Predators scoring the tying PP goal. Then Daniel Sedin takes a holding penalty in OT, almost costing us the extra point. Ass. Those shits should have been benched. Pyatt, Shannon and Raymond should have played more, while the Sedins rode the pine.
Oh well, at the end of the day, it was truly the god known as Luongo that saved our asses, stopping 49 of 51 shots and all 3 shootout attempts by Nashville.
-Bieksa was used sparingly, playing only 15:48, but that will change as time goes on.
-I'm suprised none of the top 3 Swedes were in the minus category.
-Mason Raymond is proving, over and over again, that he belongs on the Canucks' roster.
-Taylor Pyatt only missed one game and returned with a vengeance tonight, with 4 shots on goal and a spirited effort.
-I loved how Luogod pumped his arm after the shootout victory. He sure was on his game tonight. Even in the shootout he looked unbeatable.
-You know what this game has me thinking? That Nonis could leave this team as it is and still have playoff success. I don't anticipate a big move by Nonis by February 26th.
-Nashville really suprised me tonight. It amazed me how much their defencemen pinched in on the plays. And it wasn't just one of them, it was all of them. The Canucks looked confused as to how to defend against that strategy. Thank Jesus we had Luongo on his game tonight.
-We are now 4 points up on the 9th place Coyotes now. Breathing room. Greatness.
-For the record, it was Smithers' own Dan Hamhuis that logged the most minutes for Nashville tonight, at over 24:00. Hate the Preds, like the Hamster because he's from my hometown. He played well tonight.