Share All sharing options for: Burrows fined for Detroit incident / Miller to return 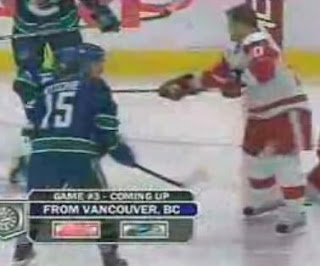 According to Canucks.com, Alex Burrows was fined by the NHL for the incident that occured at center prior to the Canucks-Wings game last week. A shocked and frustrated Burrows replied:

"The league looked at the incident and they thought I was involved and they don't want people to get involved in those kind of things and they would have rather had me skate away. So they thought I should be fined, so I'll pay the fine and move on," said Burrows. "They said I speared him back, I don't think I did, but they looked at it their way so they have to do their job. I'm looking forward to see what he gets compared to what I got; if we both get the same then I would disagree probably, but if he gets more then because I was involved I would agree."

Well, actually, Burrows gave him a bit of a poke afterwards when the crowd had gathered, as the clip shows. But Downey should get more of a fine for instigating the whole thing.

Aaron Miller had another full practice and is ready to play in tomorrow's game against the Jacketmen. Miller had missed a few games after having a hairline fracture in his foot from blocking a shot.
That would make Mike Weaver the odd man out, as the Canucks back end is pretty healthy. Can you imagine if Krajicek was still playing? That would make Aaron Miller the odd man out. We are so deep on D. Too bad for Weaver, who I thought was pretty reliable. But I like Miller's size, experience and consistency a lot better.

Byron Ritchie will miss more time with his sore back...unfortunately.