Share All sharing options for: Avalanche 3 Canucks 2 (SO): Disappointment 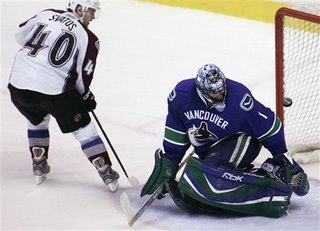 "We had about six chances to get it out," said Luongo after tonight's game. "Either we shot it off our own guys or we didn't get it out. Next thing you know, a shot from the point and Sakic's alone on the side.
I was able to get the first save and he chipped it over me for the second one. It's unacceptable, inexcusable. That should never happen, especially in an important game like that."

In such a tight game there was no room for error, and poor Ryan Kesler was going to pass the puck generously to a teammate in his own zone that could charge up the ice and put it into the open net. Unfortunately that was a turnover and the Avs put serious pressure on the Canucks in their zone for several seconds with time ticking down. Joe Sakic, career Canuck killer tapped in a rebound goal with only 15 seconds left to tie the game, and then beat us in the shootout as well. A costly error in a critical game. Consider it "lesson learned", right Kes?
Luongo and Theodore were terrific, however I'd like to pick on Luongo again. He looks weak on the glove side in shootouts and even on Brunette's in-close breakaway goal tonight. Left-handed shooters can freeze Louie with a fake and he'll fall on his ass and the shooter goes to the backhand and roofs it. You see it happen all the time when Luongo is not on his game. While Hejduk performed this, he didn't raise the puck and Louie stopped it along the ice. But Joe Sakic did not make that mistake. He buried the winning shootout goal and made Lou look stupid, and the Avs got the extra HUGE point.
I'm beginning to think that the Avalanche are not going to stop rolling now. I think they are going to keep winning and win more when Forsberg returns to the lineup soon. The Canucks are going to have to keep up somehow.
Dismal powerplays from both teams, as they went 0-for-6.
The Canucks outshot the Avs 31-26.
Matt Pettinger looked lost at the start of the game, but then really started to come on in the 3rd. He'll need a bit more time yet.
Can you imagine if Burrows' goal wouldn't have completely crossed the line? That would have put the finger of hate on Hank Sedin, who for whatever damned reason, fished the puck out of the net as the puck was crossing the line. That was close. Smarten up, Hank.
A big kudos to Adam Foote, who I hate by the way. He is such a great defensive defenceman, and he must have blocked about 8 shots tonight and was super on the PK. But he's kind of a kamikaze. I can see him getting injured soon.
I can't believe I'm saying this, but Theodore outplayed Luongo. He looked solid.
The Canucks played a good game against a desperate team. They will have to keep their heads up and continue playing well. The West standings are so close. We have to hope that Nashville and Phoenix, in 9th and 10th spot respectively, fade out and die, because I can't think of any team in the top 8 right now that is going to drop out.
Next up for Vancouver? The struggling Blue Jackets on Friday, the resurging Hawks on Sunday, and then the damned Avalanche with Forsberg on Tuesday. Payback is a bitch. 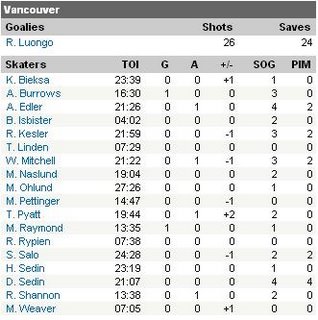