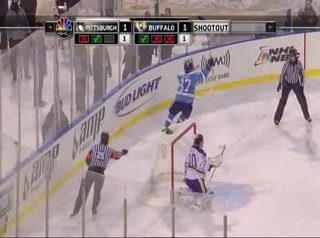 Damn eastern time zone! Us poor suckers in the West had to get up by 10:00 AM to watch the outdoor game. I didn't stop partying until about 7:00 AM. So I fell asleep for some of the game.
Not a bad game I guess. It got boring at times, but you gotta love an OT and shootout to end this one. Of all people, Sidney Crosby ends it in the shootout. Even more reason for the CBC guys to brag about him and sing his praises. Whatever. I got 2 words for ya: Vinny Lecavalier.
Anyway, a great day for hockey. Here are some links to check out.

-Pregame video of the rink setup.

-extended video highlights of the game That was pretty cool hearing Crosby screaming for joy after he bagged the winner. On the CBC feed you could hear it loud and clear as he skated by the holes in the glass where the cameras where.

-full coverage of the shootout.

-An open thread of the game over at BfloBlog.

-check out some of the game images at Yahoo Sports. Wow. Some of the visuals there are superb.

-Gary Bettman's response to the game?

"This was a memorable and outstanding afternoon, and I want to thank everyone who had something to do with making this game possible – in particular the Sabres and Penguins, the Bills, the city of Buffalo, the NHL’s ice crew and the entire NHL staff. Their close collaboration conquered significant challenges and achieved a superbly successful event. 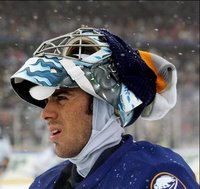 I also thank the fans. This was a fun afternoon – fun for the 71,000-plus in attendance and fun for the viewers of NBC, the CBC and RDS, all of whom did a terrific job covering the game. Based on the response, on our ability to execute, and the inquiries we’re getting from other clubs for similar activities, this obviously is something we’re going to look at doing again. This is the type of event we certainly will be looking at doing in the future."

In all honesty, good on Ty Conklin for playing a great game again for the Pens on this grand of a stage. He has come a LONG way since this in the Finals of 2006.

I sure love the sound of 71,000-plus people cheering after a home team goal. God that sounds cool.