Share All sharing options for: Vigneault calls out Luongo

Wow. How many times will a coach ever have to call out Luongo? Viggy did today, according to TSN.

"When we were on a winning run we were getting a little bit more timely saves," Vigneault said after the team's practise. "Roberto, and when we use Curtis (Sanford, the Canuck backup), it's been a little more challenging that way, for what ever reason.
I know Roberto really wants to get on the same roll he was on prior to this. He would probably be the first one to tell you that since probably the Islanders game, the goaltender he has faced . . . has probably had a slight edge there."

What do you think? Is this justified? I am going to say: for the most part...NO. I'll tell you why. I think it's unfair to single out Luongo when you have a bunch of players in front of him who aren't getting the job done. How many broken plays defensively have the Canucks committed in their current skid? Many. These breakdowns lead to obscene scoring opportunities for the other team. The team needs to tighten up defensively. That's one example.
The second reason, in my opinion, is that we have a bunch of forwards who just can't put the puck in the net. How many times have you wanted to ring Cooke's neck for missing perfect chances? What kind of stone are Burrow's hands made of? Kesler is cooling off. The Sedins and Naslund can't do it all.
I did a bit of math on all the games since the Islanders game (that Vigneault was referring to) Including the Islanders game, the Canucks have played 8 times since. Vancouver has taken a total of 252 shots in that span for an average of 31.5 shots per game. We have scored only 20 goals in that span for an average of 2.50 goals per game. Now, either we have hit a string of red hot goalies, or we can't put the puck in the net more than 2 times per game all that often. It's a bit of both.
To make the goal-scoring deficiency even more evident, our opponents combined since and including the Islanders have had 261 shots for an average of 32.6 per game. They have scored 26 goals for an average of 3.25 goals per game.
What's my point? We need to score more than 3 goals per game on average!!! Luongo is going to falter on occasion. But I don't agree with singling him out when his mates can't score. Unfortunately, asking the Nucks to score more is like trying to tell Paris Hilton to not have sex. The trapping Canucks are going to have to play better defensively and support Louie a little more like they did earlier in the season before this slump. Then they can get away with scoring less, because Lord knows, this team is not going to score anymore than it does already.
It's never a good time to go on a losing skid in the West, as you can see below. 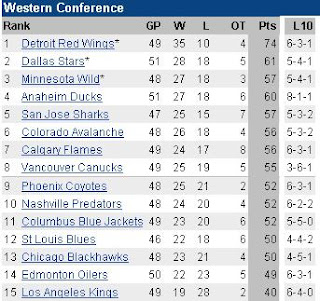