Share All sharing options for: Spot the problem kids!

Remember those games you played as a kid where you had to spot the differences in two seemingly identical pictures? Or, perhaps for us grown-ups, similar to playing Photohunt at a bar when you're bored but without the x-rated options or future hangovers?

OK, here's a Vancouver Canucks version for you where we can all pretend we're kids and spot the problems with a single image. Ready? Let's start with an easy one:

That's right sports fans...when you see Sanford and MacIntyre splitting time at the NHL level for a team that can't score, it's called a serious problem. A dilemma if you will. I believe a Buddhist could call this a koan and, if not, screw it I am. Abandon logic!

But that was an easy one, let's kick it up a notch OK? Ready...BAM! 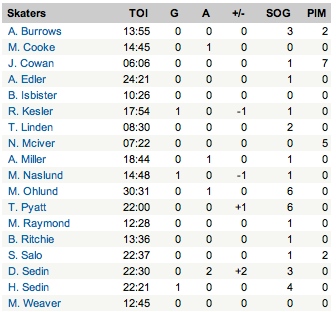 This one is harder; its a veritable cornucopia of truly awful, very bad things. Pyatt with six shots and nothing to show for it? Sure. How about Naslund barely getting more TOI than Ritchie? Yeah, not bad. Speaking of which, how about Cowan getting almost no time followed by call-up McIver (don't bother telling me they weren't playing because it was a close game, this game was over in the second). Isbister getting more time then Linden? Tough on the eyes. Or that fact Mike Weaver is still playing in the top six?! The real answer is all of the above. And, for you future analysts, if you view the two images together, then you should be amazed the game wasn't more like 5-0.

OK, want one final shot? This one is very tough and it'll help if you're a Canuck fan caught in America without access to Center Ice (yeah, I know, there are like 10 of us):

As reader Jeff pointed out, the braintrusts at InDemand don't see fit to offer the Panthers/Canucks game this Friday because, as you can see, they have way too many games to show. No that's not it? Perhaps the Panthers have no strong TV presence and thus we have no outlet to use for the game. Maybe? Surely the Panther fans have every reason to view the game, but not us chums at home. If you're so inclined, feel free to leave your two cents direct to InDemand at (646) 638-8200, but if they are anything like the guys running Center Ice Online, your time may be better spent trying to split the atom with your mind.

Moving into Tampa tomorrow night, what's in store for us? More McIver? Weaver madness? Pyatt gets 20 shots? At least Lui is back and the Bourdon experiment can start its umpteenth attempt at legitimacy.

Speaking of legit, have you seen the Lightning Girls? In your best Borat impersonation, try it with me....NIIIICE.