Son of a Beech

Share All sharing options for: Son of a Beech 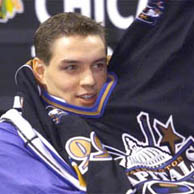 Drafted three slots back from the Sedins in the '99 draft, and one slot ahead of Mr. Pyatt, was one Kris Beech (four guys in the top ten? Suck on that Stefan!). A lover of finger painting and haiku's, the center has bounced between the Jackets, Preds, Pens and Caps before becoming a member of your Vancouver Canucks this morning. Said barkeep Dave Nonis:

"We’ve been banged up down the middle, both here and in Manitoba, and Kris has some experience...He’s played in the league a significant number of games, he’s played pretty well this year and we thought it was a good opportunity to improve our depth. It gives Alain another option, and how much Kris plays will be up to him."

As I watch the Sharks skate circles around the guys and they've mustered a killer three shots in one period, the more help the better honestly. A big guy who had a season best of 26 points in 64 games last year on the woeful Caps? Sounds a lot like a Pyatt in hiding to me. He'll be given all the ice time to prove himself as long as he tries. So let's party, it's Beech time!