Sometimes it’s all too easy

Share All sharing options for: Sometimes it’s all too easy 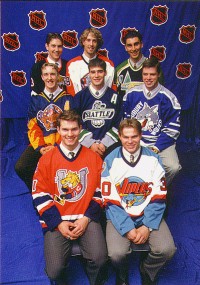 Like taking candy from an armless, blind baby, but hey we only get one shot a year (at best) to rub it in, so just a reminder....

On June 24, 2000 the New York Islanders traded Roberto Luongo and Olli Jokinen to Florida for Mark Parrish and Oleg Kvasha


And why Mr. Milbury? From his lips (and ignore the Nathan Smith reference later on in the article):


We all know we could crunch numbers and make that trade look even worse but why spit on the Islander fans like that? Besides you have our ex-goalie as a lady-loving GM. Good stuff.

I'll be bringing my drunk blogging skills over to Alanah land. Stop by and perhaps chuck a sickie tomorrow won't ya?