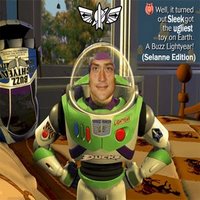 So Selanne is back in the fold for the Quacks as of today. But I wouldn't press the panic button on the Ducks repeating as Champs just yet. The biggest reason is that Teemu, or Buzz Lightyear as I like to call him, is not going to have that glorious chemistry with Andy McDonald like he had last year, as McD went to the Blues. 78 points for McDonald playing with Selanne last season and a rejuvenated 94 points for Selanne playing with McDonald last season. Selanne will have to find that kind of chemistry with someone else now. And that may or may not happen.
A big negative is that the Ducks still have Todd Bertuzzi, and he is a floating inconsistency at best on most nights. I can't see Bert raising a Cup this year, can you?
Nah, not concerned about Teemu's return. Sure, the Ducks are better for it, but it's not the same team as last year's championship team. Just my opinion.