Share All sharing options for: Reality check time for Vancouver 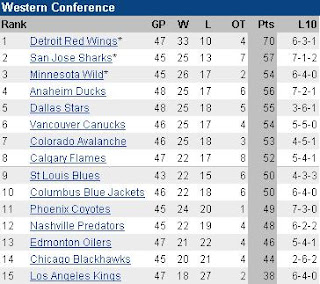 The Canucks stabbed themselves in the foot by mentally showing up 10 minutes into period 1 last night against Columbus. Problem is, by then the score was 2-0. Regardless of the fact that they tied it in the 2nd, Jason Chimera's late 2nd period goal exposed a disgusting stat: the Canucks do not win games when trailing after the second period. Not even Vigneault had an answer for that post game. I believe his exact words for why the Canucks cannot mount comebacks in the 3rd is "I don't know."
Anyways, the tightness of the Western Conference is suddenly becoming an immediate threat to the Canucks, who dropped another spot last night, as the Ducks moved past them. Look at how many games in hand the Blues have, for one example. And why won't the Avalanche just give up and quit with the long term absences of Sakic and Smyth?
The best option here is to win the Northwest Division, which is proving to be a daunting task.
Next up: Detroit on Thursday. Brace yourselves.