Peter Forsberg won't sign with Modo; wants to play in the NHL

Share All sharing options for: Peter Forsberg won't sign with Modo; wants to play in the NHL 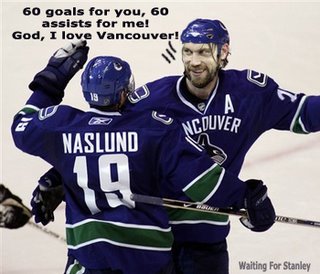 Peter Forsberg's intention is to play in the NHL this season, as he has turned down signing with Modo. Forsberg has told his agent Don Baizley that he may negotiate with NHL teams.
Forsberg has said that he is feeling 100%, so the injury factor may not come into play with him this year. So at this point, any team with a talented Swede who is friends with Forsberg is the front-runner in the Forsberg sweepstakes. That includes Vancouver...where he could pass the puck to a bunch of guys can't hit the net....ha.
We'll see. But the rumors will now run rampant over the next few weeks.
My guess, is that he signs in Detroit. Detroit would be more appealing because of their high-scoring offence and potential for success. And no...I really don't think the Leafs are going to be in the running. Not when they are in 14th spot in the East. Forsberg is going to want to enter a winning environment.
The Canucks have a chance I think, but then again, we have had a hard time luring excellent free agents over the past several years. Must be all the rain in Vancouver.
I kid...maybe. But our chances are higher than Toronto's I'm sure.
Forsberg would be an excellent addition just in the fact that he'd kickstart Naslund's offence. What a great 1-2 punch we'd have.
So what about the Canucks' game against the Lightning today? Is the losing going to stop? Vigneault told the Province yesterday:

"I was thinking about this going home. It's sort of like I'm the parent and I have a son or daughter having trouble in school," Vigneault said. "You work with them to improve and you keep working with them. You get them a tutor. Then they go to write their exam and they are still an average student. Nothing changes. They get frustrated. This is where my frustration lies -- the kid is putting in a lot of effort but he's still average."

-The Nucks have lost 4 of their last 5.
-The Lightning have won 3 of their last 5.
-The last time we played Tampa was in March of 2006 where we won 5-1.
Tampa is almost as inconsistent as we are lately. But their biggest issue is definitely goaltending. Ours is a depleted blueline. We will get Luongo back between the pipes tonight, and that should help. Tampa's lack of decent goaltending could open up some scoring chances for a team that has scored 13 goals in it's last 5 games.
Will the Lightning snipers be contained tonight? Can the Canucks get back to playing consistent defence? How about Bourdon or Edler chip in offensively tonight? How will Jason Jaffray respond after being recalled from Manitoba? His last Canuck outing was short-lived.
I think we can beat these bums. I say we take it 5-4 in an entertaining affair.