Share All sharing options for: Nice guy’s can finish first 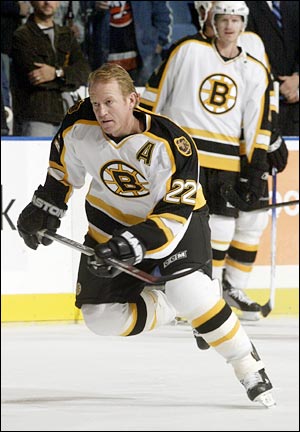 ...like a moron, I just watched at least 30 minutes of the Brian Leetch tribute and banner raising. What can I say, I take my pain in strange ways.

Leetch always seemed like a nice guy and you could tell from tonight that he really is a classy player (unlike Messier who, once again, couldn't help himself from slobbering like a four year old girl) and still seems really down to earth. Sadly, they did play the '94 game seven goal of his over and over again - coupled with Stan Fischler saying he knew the game was over RIGHT THERE (oooooo....kkkkkkkk) - but once that was stomached it was good to see Leetch get what he deserved (did you know he holds 42 Ranger records? Jeebus. One must be stomaching Messier for years without taking a swing at him). Also comical to see Domi ride in on an ATV and to see Beukeboom again. Seriously, top that last name as a hockey player.

It's just a shame Leetch had to wear that filthy jersey for most of his career. Which is why I honor him in my own little way: noting his 61 marvelous games with the Bruins. You go big dog.

BTW - Nice win for the Canucks last night. Zanstorm has a great shot of Vigneault smirking at Sedin's winner.