Jimbuff brought up a good point by praising Daniel Cleary in the comments section, and that he was a Newfie and all. Now, I hate Red Wings and most players that play for them. But I just can't find it within myself to hate Cleary. Drafted in the 1st round 13th overall by the Black Hawks in 1997, the now 29 year-old winger

had high expectations. But for whatever reasons, he did not put up the offensive numbers for Chicago.
In March of 1999, Cleary was traded to Edmonton along with Ethan Moreau, Christian Laflamme and Chad Kilger in exchange for Boris Mironov, Dean McAmmond and Jonas Elofsson. Cleary's speed and grit was evident in Edmonton, from what I remember, yet his highest out put in Edmonton over 4 years was 14 goals and 35 points in 81 games in 2000-01 (IHDB). Injuries played a negative role in Cleary's career over the next couple years in Edmonton and Phoenix (who claimed him as a free agent in 2003.)
Cleary was not signed by any NHL team in 2004, and ended up playing in Europe for that season, where he registered 11 goals and 37 points in 47 games.
I guess that was enough to impress the Red Wings who signed him in 2005. Cleary played in a checking role behind guys like Shanahan and Yzerman, but when both of those legends left for free agency and/or retired, Cleary got his chance to shine. And that is what he has done since then. A career-high 20 goals and 40 points in 71 games last season, including a strong playoff run proved that Cleary had something more to give. This season, he already has 18 goals and 34 points in 48 games. He looks to hit the 30 goal 60 point plateau. He also looks to be getting a substancial raise as he becomes an unrestricted free agent this summer. How much is Cleary making right now? How about a piddly $662,500 salary. Talk about a steal.
So, I am a sucker for underdogs. And Cleary is an underdog that is now hitting his prime. And regardless of the fact that he wears a stinky Wings jersey, I can appreciate his turnaround and respect that.

Speaking of respect, I can understand a bit all the hooplah surrounding the 50th anniversary of Willie O'Ree being the first black person to play in the NHL. It was a ground- 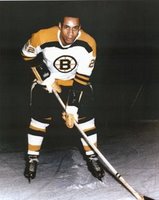 breaking event given the times no doubt. But forgive my harshness when I say: I don't really care about it. I don't get all teary-eyed over it. But I guess I wasn't even near being born during the racist years of the early 1900's. So I can't even begin to understand what O'Ree went through. Personally I find Inge Hammarstrom and Borje Salming's arrival into the NHL just as or more important.
What I mostly think of with this O'Ree situation is: when is a black player going to step up and become a dominant offensive/defensive player? Pokey Reddick and Kevin Weekes are/were decent goalies, and Anson Carter had a decent short offensive NHL career. But not one black man has yet to come along and make a serious impact, unless I am mistaken somehow. And no, Iginla doesn't count, because he is half and half. Just a thought.