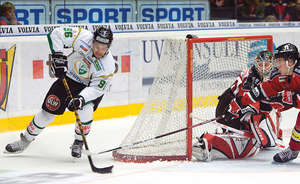 A couple of intriguing stories in the Vancouver Province today:
The Province also has a story up about the Canucks being "fronrunners to sign intriguing Swedish prospect Fabian Brunnstrom." He is a talented 22-year old who is being compared to Daniel Alfredsson apparently. He was not drafted in the NHL and is about to become an unrestricted free agent. Vancouver is one of his main choices. Oh great...more Swedes. Also Detroit and Toronto are believed to be in his top 3.
Ok, so stop the fucking bus. Just who is this Brunnstrom kid who can pick where he plays?
He has size (6'1" 195 pounds or more), great speed and is classified as a late-bloomer. The video below shows his great scoring touch, but his stats with Karlstad this season show that he is more of a playmaker, with 24 assists and 32 points in 38 games.
Word is that every NHL team has been scoping him. The Wings have been 'wooing' him. And I expect Canucks' European scout Thomas Gradin has been actively trying to bring Brunnstrom to Vancouver. I guess he's available right now?? If signed by anyone he will earn an NHL entry-level contract.
Hakan Loob had this to say to the Hockey News last November: "He's coming pretty much from nowhere." Mentally, he has grown strong in the past year, but he has the potential to become mentally stronger. He looks like he has been in the Elite League for a couple of years the way he moves the puck and skates and everything like that."
Loob, who is the Farejestad GM, also warned against rushing him at the NHL level, saying: "If they treat him the right way, I think he's got a good future ahead of him," Loob said. "But if he's thrown into the NHL too soon, he might not do anything."

Roberto Luongo hasn't spent much time with goalie coach Ian Clark lately, but will be working with him during the All Star Break to work out a few 'kinks' in his style.

"If Ian was [in Vancouver] I could have talked to him," Luongo said. "He hasn't been here. We've been talking on the phone but it's not the same. It's going to be important to get some work in with him and adjust a few technical things which I'm sure he's noticed."

The Province goes on to use words like 'slumping' and 'struggles' to describe Luongo over the past few weeks, which still embitters me.
The team has struggled.
I wonder what technicalities Luongo has to work on.... his side-to-side movement looks alright as far as speed goes, but he does get beaten through the 'wickets' on occasion. According to the paper, Luongo 'flourishes' by tinkering with his game, so it will be time well spent with Clark.