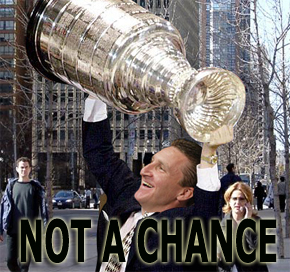 It's a good day for Leafs' hockey! President and CEO Richard peddie stated this morning: "After full consideration of the Leafs' situation, it has become clear that change and a new direction is needed,'' stated MLSE President and CEO Richard Peddie at a press conference held at the Air Canada Centre Tuesday. "Regrettably, we did not win enough games to reach our goal, winning the Stanley Cup.

"Our team performance has fallen short of what is to be expected. Today, we need to forge the start of a new beginning for (the) Toronto Maple Leafs. And we begin with the man seated next to me, a man with Hall of Fame credentials, who is highly regarded by Leafs fans and by hockey people around the globe. We have reached out to Cliff Fletcher and his 50-plus years of hockey management experience to serve as general manager of the Leafs on an interim basis."

VIDEO OF THE FLETCHER HIRING

Fletcher has no desire to be the long-term GM. He will lay the foundation for when a full-time GM comes in. He has basically signed a 19-month contract. Fletcher stated that in 2 weeks they will know what direction to take with the team.

Fletcher stated that Paul Maurice will not be fired this season.

Fletcher didn't say much about the situation on Sundin except to say that he would "Do what's right for Mats" as he has a no-trade clause, and is the leader of the team.

Ferguson reflected that statement in his interview. I have a hard time believing that Ferguson didn't see this coming and that he 'blocked it out his mind'. Lies. That or he's completely clueless.

I have more opinions on where I think Fletcher is going to take this team, but I'll wait for that until tomorrow.

Wow, what a day in Leafland. What are Ferguson's chances of being an NHL GM again? He sure tried to sell his services in his interview.