Downie's sucker punch on Blake under investigation / UPDATE: No suspension

Share All sharing options for: Downie's sucker punch on Blake under investigation / UPDATE: No suspension 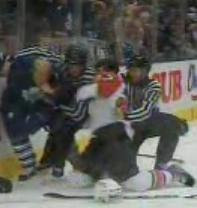 Steve Downie apparently isn't going to have a long stay in the NHL at this rate. In only his 4th game back since serving a lengthy suspension for his illegal hit on Dean McAmmond, Downie sucker-punched Toronto's Jason Blake while Blake was tied up by the refs during Saturday night's game. If you have not seen the footage of it yet, check it out here.
Hey, I love violence in hockey, make no mistake. But this kind of thing just isn't right. Blake's arms were clearly tied up by the referee and any potential fight was not going to happen. So Downie had no right to sucker punch Blake when he was that vulnerable. Today the NHL deemed no suspension is warrated, but you can bet that this guy is going to be monitored quite closely.
But hey, it's another black eye for hockey isn't it? Not really. It's a literal black eye for Blake and an on-going stain on the career of a player in Downie, who has the mental capacity of a headless chicken and the personality of a shit sandwich.

-Downie fights his teammate Akim Aliu during practice in the OHL.
- Downie loses his cool
- Downie compilation of dirt, sweet hands, and fisticuffs.If he kept his game clean, he'd be a hell of a player who'll enjoy a good NHL career.