Nabokov and the Sharks have gotten the better of the Canucks this season, winning all three meetings by a combined 12-5 score. Nabokov is 3-0-0 with a 1.68 GAA in those games while Luongo is 0-2-0 with a 3.56 GAA versus San Jose.

I got a bad feeling about tonight's game. Why do we suck so bad against the Sharks? The last game we played them was on December 13. Curtis Sanford started in goal and was pulled in favor of Drew McIntyre in a 5-2 loss. The Canucks only had 17 shots total. That game was in San Jose.
The Sharks just lost their Pacific Division lead to the surging Stars last night, so they will be extra motivated. The Canucks hold the Northwest by 1 point over Calgary, and trail Dallas by 2 points, with 3 games in hand.
The Sharks are well rested, as they have not played since last Saturday, in a 3-2 win over Columbus.
Joe Thornton has not had a point in his last 2 games. The Sharks are getting scoring from other guys like Rissmiller, Pavelski, Bernier, etc. No, not Cheechoo either. He continues his slump.
Both the Canucks and Sharks have won 4 of their last 5.
What we can expect from the Canucks tonight is perhaps a slow start. We will see Luongo rebound I'm sure. Louie is a competitive guy and, like Patrick Roy, rebounds after lousy games.
But given the Sharks' extended rest period, their motivation to take over the Pacific, and our general inability to beat these bastards this year, I am going with the Sharks to win this one as well, 5-3.
Brad Isbister and Jeff Cowan are ready to play tonight, but we'll see if Vigneault inserts them. Ohlund is not near returning yet. 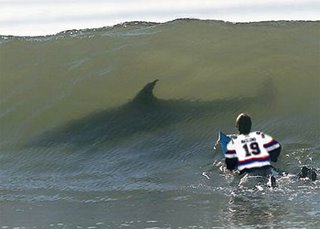 A strange fact about the Sharks: they have only scored 105 goals this season. That is 2nd worst in the West, ahead of the Blues (103 GF), and 4th worst in the NHL. However, they don't allow a lot of goals against either (94 GA in 41 games). That is good for 2nd in the West (1 better than us) and 2nd in the NHL. Only Detroit has allowed fewer goals against (90). So I suppose a 5-2 prediction is technically insane. But I'll stick with that.

Check out the goalie leaderboard at NHL.com. Nabokov has played 6 more games than Luongo. He is leading the NHL in wins. Luongo has a better goals-against-average at 1.96 (2nd in the NHL). Nabby has a 2.01 GAA (4th in the NHL). Luongo has a .930 save percentage (3rd in the NHL) and Nabby has a .917 GAA (12th in the NHL). So if anyone is going to save us tonight it's Luongod.
It's going to be tough. This is the last time we play the Sharks this year, so this is our last chance at retribution. If we can atack the Sharks early like we did against the Isles then we could have a chance. I just don't see it happening.