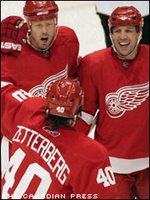 The Canucks were outshot 16-5 in the 1st, but don't let that fool you. Vancouver had better scoring opportunities in those 5 shots did than Detroit did in their 16. But Vancouver failed to capitalize, especially Hank Sedin, who was all alone in the slot. He almost refused to shoot it point blank. The Wings are content to throw everything on net from every possible angle. It just so happened that Dan Cleary tipped one of those shots passed Luongo with under 2 minutes to go.
2 powerplays in the first for Vancouver to Detroit's NONE. Yet we failed to generate enough chances or bury the ones we had.
Can't fault the Canucks for not showing up tonight so far. They are playing a spirited game, but need to shoot more and pass less. 1-0 Wings.

That late goal by Cleary seemed to give momentum to Detroit early in the 2nd, as they carried the play and scored (Cleary again) less than 2 minutes into the middle frame. But then the Canucks settled down and forced the play more and were rewarded at the 15:21 mark with a goal by Hank Sedin, and then just under 3 minutes later on a flukey goal by 1000 game man Markus Naslund. Poor Rafalski had a rough time out there on Naslund's goal. He had a wide open net moments earlier and put it off the crossbar, and then Naslund banked his shot off Rafalski's skate to tie it 2-2.
It's going to be a great 3rd. Look for Detroit to put even more shots on net, more like they did in the first. They seemed to get away from that a little in period 2. Shots after 2: Detroit 32 Canucks 17. But the score is tied 2-2. To me, the Canucks looked poised to pull one out here.
-gad damn the sound sucks on Sportsnet in Detroit. It sounds like the mic is in a tube, or like you are listening to the game underwater.

Wow. What a 3rd period. End to end rushes, great chances, super goaltending. That was great stuff. Probably the best Canucks period I've seen all year. Now we wait to see if the Sedins can be Wings killers in OT. They've done it before......

Detroit carried the play for the first half of the OT, and then Luongo took a delay of game penalty after batting the puck out of the air and over the glass. Completely unintentional. But the Canucks did a great job on the penalty kill. Only problem is, the period ended about 15 seconds after the penalty ended. No time for the Canucks to take it to Detroit. Now it comes to a shootout, where I don't like our chances. It will take the Almighty power of the Divine One, the Luongod, to bail us out of this one, as we are completely out-skilled. Could you imagine if Linden would bag the shootout winner here??? damn...let's see.

Au contraire. Only one person beat a goalie in the shootout and that was Zetterberg, who shifted to the right and scored 5-hole on Luongo. What a waste. God I hate Detroit. Fucking shitbags. 3-2 Wings.

SHOT CHART (ESPN) Detroit outshot Vancouver 49-28, the first time the Canucks have allowed more than 40 shots in a game. But check where Detroit was shooting from. EVERYWHERE.