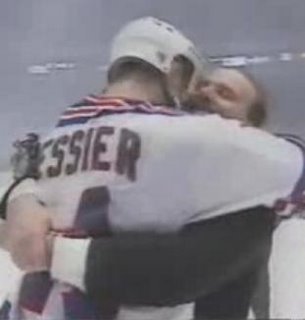 The Vancouver Canucks haven't lost a home game in regulation in more than two months. The New York Rangers, meanwhile, haven't won in British Columbia in more than 10 years.
The Rangers continue their rare tour of western Canada on Thursday night when they visit GM Place for the first time in five seasons.

Strangely, I believe I was at the last game that the Rangers won at GM Place. The Messier-Nemchinov-Kovalev line killed us, and I think the final score was about 5-2 at least. There is no love for the Rangers in Vancouver, or from any Canucks fan anywhere for that matter. The hate runs deep through their veins from the Finals in 1994 where we came within a goal of winning the Stanley Cup. The bitterness never ceases.
I, of course was a tad torn on the whole matter because the Nucks had taken out my then precious Leafs in the previous round.
Anyway.
Both teams are coming off losses to Calgary. The big difference here is that we've had a few days off, and the Rangers are playing back-to-back road games. Look for New York to mellow out as the game goes on. I'm actually hoping they come out slow so the Canucks get the early lead and trap, trap, trap! But it's hard to tell with these Rangers. They are an inconsistent bunch. I watched the Calgary-Rangers game last night and it still seems that the NYR are out of sync. Guess that's what happens when you make the biggest splash in the free agent market, acquiring the 2 big commodities (Gomez and Drury) and expect them to fit in. That has not happened yet, for the most part.

My prediction you don't ask? I got the Canucks taking this one 3-2. Look for the Rangers to burn out and the Canucks to capitalize. Should be a beauty game. No need for the Canucks to be taking too many penalties though. I don't like the firepower on that Ranger powerplay. Their PP isn't up to snuff yet, but why give them any chances?