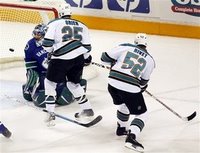 This may be premature in a sense, but watching the Sharks man handle an unready Canucks squad last night brought one question to my mind: can this Canucks team go deep in the playoffs this year? The Sharks used their size and speed to dominate Vancouver in a 3-1 win in the tank last night, and the size difference was evident. The Sedins could not get their cycling game going because the Sharks would push them off the puck. Naslund and Jaffray looked useless and petit.
It seems to me that the only way Vancouver would beat the Sharks in a playoff series would be to maintain consistent energy and move the puck around very quickly while staying disciplined at the same time. But the Canucks were shorthanded 7 times (to the Sharks' 2) last night, and Roenick bagged the back-breaking 2-0 goal on the PP.
Could we beat the Sharks in the playoffs? Well, we just got swept 4-0 in the season series, and that concerns me. I was looking down the Canucks bench and I didn't see a Thornton (3 assists last night) anywhere in sight and I knew we were screwed.