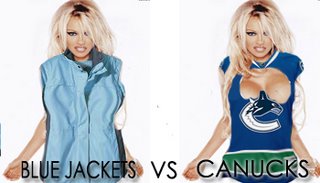 Yeah, unfortunately, it's Pam Anderson of all people representing the Canucks on Jay Leno. She is one of BC's best-looking exports, but has the brains of a retarded chicken. Oh, and speaking of chickens, remember her big campaign against KFC because of the way they treat their chickens? Almost laughable.
Back to hockey... The Canucks' stinky schedule takes them into Columbus tonight against a Jackets squad that has won 5 straight at home and is extending a franchise record home wining streak. Both teams have won 3 of their last 5. Both teams are 6-4-0 in their last 10.
What is motivating the Jackets in a big sense now is that they are only 3 points out of a playoff spot, sitting in 10th place. The Canucks on the other hand are now in 5th place because the Northwest Division AND the Western Conference is such a dog fight. They are 4 points away from falling into 9th spot. So a win here is mandatory.

I think we'll take this one tonight, but it should be close. We are facing Pascal Leclaire afterall. He's damned good ( 5-1-0 with a 1.78 goals-against average in his last seven starts). I say we win 2-1 in a shootout.

-The Canucks have won both game against the Jackets this season by scores of 4-1 (October) and 2-0 (November).

-Taylor Pyatt needed over 20 stitches to put his mouth back together after taking a puck in the face from Eric Brewer. He also had to have a splint inserted in his mouth to hold his teeth in place. Lovely. Taylor ain't so pretty anymore is he, ladies?

-For the Jackets, apparently Sergei Fedorov will be out of the lineup with a hip pointer. Adiose, sucka.

-Kris Beech will be extra motivated tonight as he faces the team that put him on waivers last week. Look for him to play a strong game.