Share All sharing options for: Canucks-Islanders Preview: Snow in Vancouver 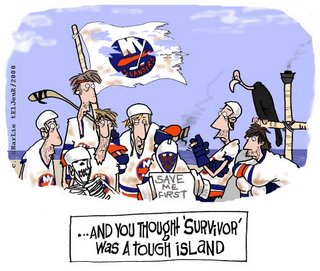 As Canucks.com points out, this is the last time the Canucks play an Eastern Conference team this year. How do you like that? I don't.
The Islanders, who got smoked 3-0 by the Coilers last night, now march into GM Place, where the Canucks have earned at least a point (11-0-2) in their last 13 games played at home. That's almost like Joe Peschi walking into church. Trouble.
The inconsistent Islanders are officially out of a playoff spot, barely stuck in 9th spot in the East. So much of their fate rides on the offensive output of summer-acquisitions Mike Comrie, Bill Guerin, and Ruslan Fedotenko...3 inconsistent guys. The Isles are 5-3-2 in their last 10.
The Canucks, for the time being, have lost top spot in the Northwest to the surging Flames, and sit in 4th spot in the West.
We look to have lost Alex Edler, who left yesterday's practice with back spasms, as did Brad Isbister, who had the same problems with his back. Both are doubtful for tonight. Mattias Ohlund is not near returning yet from a concussion he suffered against the Devils on December 18. Norm McIver, known more for his goonery than scoring, has been called up by the Canucks today to replace the fallen Edler. 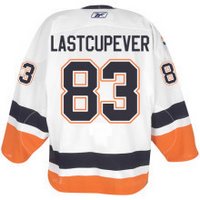 Jeff Cowan has been practicing with the team and could return tonight.
My call? I'll take the Canucks to take this one 3-1. Could even be another shutout for Louie. The Canucks are rolling at home. Luongo is cookin'. We own the Atlantic Division this year (2-0-1). It would take a complete lackluster effort by Vancouver to lose this one.