Share All sharing options for: Canucks get much-needed 2 points 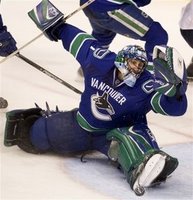 Forget how hard the Canucks made it for themselves to beat the Blues in a shootout tonight. The bottom line is that we got the 2 points before the All Star break and pulled ourselves within a point of the Northwest Division lead and 3 points up on the 9th place Predators.
It could have gone completely wrong. Luongo made me look stupid for defending him by letting in a weak DJ King goal early in the game, and looked somewhat shakey throughout the first 2 periods. But he really proved his worth in the 3rd period and especially the shootout, where he didn't allow any goals and was stellar. There you go Vigneault, Luongo made key saves at key times. 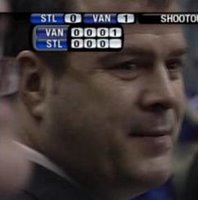 Thank you Danny Sedin for scoring a beauty shootout goal to give us the win. You can see Vigneault's smirk after Dank scored that goal (pictured). An undressing.
I had several thoughts in the shootout:
- Kesler needs to change his approach in shootouts. Same move every time: foot-kick-fake left-go right blah blah. One-trick pony. Try something else.
- no body went blocker side on Legace except Sedin, who deked him out of his jock strap. Legace is a small goalie and looks weak high blocker side.
- Luongo was supreme in the shootout. What a performance.

Jason Jaffray did the opposite of what I thought he'd do. He showed a lot of hussle, but took 2 stupid penalties...one of them ending up in the Blues taking a 2-1 lead. That pretty much ended his night as he didn't see much icetime after that.

So...the record of the Canucks losing every game when trailing after 2 is over. Good.

Krajicek looks fucked. Could be a separated shoulder. Bring on Bourdon I guess.

Quite an entertaining game. I would like to give mad props (as Temujin would say) to the Sedins and Edler. Those 3 looked possessed in OT. They really wanted to win it. Edler is poised to become a steady star in the NHL. Great game by him.
Same applies to Ohlund. He pinched in at key times and was great tonight, scoring twice. It was common knowledge tonight that the Canucks needed more points from their defencemen. Ohlund delivered.

By the way..the Canucks' inability to capitalize on opportune chances remains evident. Why do Cooke and Burrows have such hands of stone??? God dammit. Our checking line shows great hussle but not enough finish.