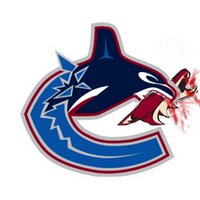 The Canucks probably got back home near 3:00 AM this morning. I'm not going to over-analyze this one except to say that if the Coilers beat the Coyotes last night 5-2, then we can definitely beat the Desert Dogs. At least we aren't going to get pushed around by the Coyotes, for the most part. We should be able to take advantage of a road-weary Phoenix team, and use our home ice advantage to win this one 4-1, to make amends for last night's death.
Any other guessers out there?

- Luongo is 3-0-0 with a 1.95 GAA against Phoenix since he joined Vancouver last season.
- Phoenix had won 4 in a row prior to losing to Edmonton last night.
- More from Canucks.com: Curtis sanford will play in goal tonight. Kris Beech will make his debut tonight. Can't wait.
Hey, does anyone else get the feeling that Jeff Cowan is going to be placed on waivers with the acquisition of Beech? Just a thought.