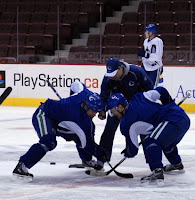 Kris Beech's stay in Vancouver was so short-lived that he probably never even made it to Hooters. He was placed on waivers by the Canucks today and claimed quickly by the Washington Capitals, the team that drafted him in the first place. He had 1 goal and 1 assist in 4 games with the Canucks. Maybe his defensive game wasn't good enough or something, because he sure can't stay with one team very long.
This opens up a spot for Jason Jaffray, who was recalled by the Canucks yesterday. Maybe the subtraction of Beech and addition of Jaffray will get the Canucks back on track against the Blues tonight. I say: Bank on it! We're gonna win tonight 3-2 and Jaffray will be like a shot in the arm for the Nucks.
Face it, we have to win. Nashville and Columbus are only one point away from bumping us out of a playoff spot, while the Flames continue to put some distance between us and them for the Northwest Division lead (3 points).

Let's see how Luongo reacts to be called out by Vigneault yesterday. He is battling the flu I hear as well....
The Blues have lost 5 of their last 5. One of those was a 4-3 loss to us on January 13. Of course that was our only win in our last 5 games. We are trying not to extend our losing streak to 5 games tonight.

Pressure is on. Let's get it done boys! 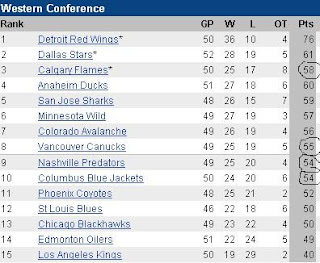