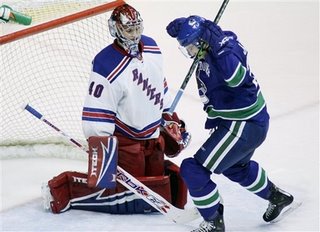 What a terrific nail-biter of a game last night. One thing that rings true still, is that the Canucks don't lose hockey games when leading after 2 periods. Not at all this season. Zip.
But that can be attributed mostly to Luongo, who is in a zone that I can't even imagine right now. That pad save along the ice in the 3rd was sickening.
Also, the Rangers took 4 consecutive penalties in the 3rd period and shot themselves in the foot. That took the wind out of their sails.
It didn't hurt that Shanahan wasn't playing either!
I was getting ready to celebrate and be joyous, but then the damn sewer line backed up at our place. So yeah....the rest of my night was shitty.