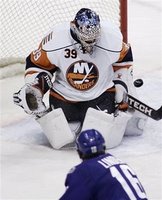 That was frustrating to watch. After outshooting the Islanders 42-26 in regulation, the Canucks had to play an extra period and a shootout to beat their opponent. This is due in part to the fact that Luongo gaffed on both Islander goals (in Patrick Roy fashion), and that Dipietro was that damned good. Technically, this should have been a 7-0 route.
But no, I flicked off the tv last night feeling relieved that the healed Edler bagged the shootout winner, and ticked off at the same time because the Canucks almost pissed this one away.
I am directing a bit of anger at Matt Cooke, who was set up up perfectly and missed a wide open net.
Luongo, on the first goal, completely gaffed because it looked like he was ref-watching again because he thought the play was offside. The 2nd goal he let in was because he lost the puck in his skates while wandering behind the net. So, an off game for Louie.

"But what a performance in the shootout huh?" Luongo said jokingly post game. "At least I finished off on a positive note."

You could see the smile on his face after the game ended. Like a smile of relief.
I like the newly-formed Naslund-Jaffray-Pyatt line. They generated a lot of chances. Especially Pyatt, who had a terrific game, using his size more than I've seen him do in a while.

There are questions arising (again) about the Canucks' ability to score after last night's game. But I'm not really biting. Rick Dipietro, the games' first star, really was that good. Like John Garrett said last night, he could have been all 3 stars.