Canada squeaks out a gold medal victory at the World Juniors

Share All sharing options for: Canada squeaks out a gold medal victory at the World Juniors 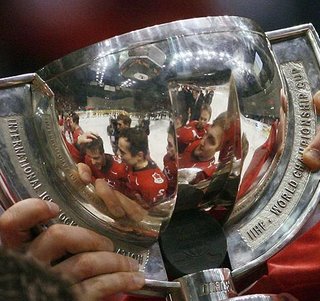 I could go on and on about how we Canadians dominate at the World Juniors and overall at world tournaments but I will approach this post game from a different perspective: we got lucky.
After blowing a 2-0 lead with less than a minute left, the momentum was all in favor of the Swedes who were taking it to us not only in the 3rd (I think they outshot us 14-3), but in the overtime as well.
Canadian goalie Steve Mason said post game that the Canadian team was feeling down after the 3rd had ended, and it showed in the OT. But it was Mason who held Canada in it with a great save only minutes into the extra frame. Canada goes up the ice the other way, dumps the puck in harmlessly and the Swedes easily took control of the puck in their own zone. The one Swede defender passed the puck behind his net and around to the boards to what seemed to be an unsuspecting 2nd Swede defenceman. The puck bounced off his skate right to Canadian Shawn Matthias, who used his size to crash the Swede goal from the right side a la Glenn Anderson. Swede goalie Jhonas Enroth stopped the shot but Canada's Matt Halischuk shoved in the garbage goal and that was it.
One little mistake by Sweden, who was poised to take it, and it ends up in their net.
Enroth played so well. He lay in the crease crying for several minutes after the winning goal was scored. I felt bad for him. I felt remorse for the Swedes. But at the end of the day, like the old cliche goes: it doesn't matter how you do it, as long as you get it done. And Canada, lucky as hell, got it done.

Above photo is from TSN.