Can the Canucks get back on track tonight against the Wild?

Share All sharing options for: Can the Canucks get back on track tonight against the Wild? 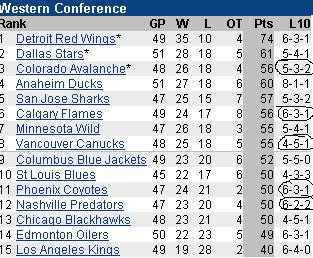 The Canucks' free-fall down the Western Conference standings continues, as we are now in 8th spot with several teams below us breathing down our necks. Ah yes, tense times. Thanks, Bettman. Actually I really like that so many teams are this competitive in both conferences. It's fun to watch, even though it is at our expense at the moment.
First of all, let's check into Markus Naslund's salary situation and what is being said by him about it. Personally, I do not believe he is earning his $6 million dollars at this point, and I'm sure that anyone over the age of 14 can realize that. Naslund, according to the Vancouver Province disagrees.

"Yeah, it does bother me," Naslund said. "It's easy to be negative and find things that are wrong instead of understanding the whole picture. If you haven't been a part of a team ... I think it's difficult for people to understand.
I want to deserve what I earn. But if you look at my whole career, I don't feel guilty about my salary now because there were a lot of years where ... [I could have] made a lot more money."

Oh yeah? And what years were those?
Naslund almost redeems himself in my eyes when after the aforementioned, he stated he would consider a paycut:

"If the situation is right, yeah, I could see myself doing that," Naslund said. "I've always said my decision is based on how I feel and how I think I'm doing. I'm not going to play just for the sake of playing and collecting money. I have to feel I can contribute and look myself in the mirror and feel that I'm helping the team.
I haven't thought about playing somewhere else. You should never say never, but to me, Vancouver is my team. It's going to come down to sitting down with the family and deciding what the big picture looks like after this season is done."


I say the words "almost redeems himself" because I think that the above statement is frankly full of shit. If Vancouver management decides Naslund is worth less and Naslund and especially his agent disagree.......bye-bye Naslund. Screw loyalty and integrity.

Whoa, I got sidetracked. Back to the Wild and Canucks..
We have beaten them 2 out of 3 times, outscoring them 11-6. The Wild have won 3 of their last 5, beating Phoenix, Chicago and Detroit and losing to the Ducks and Flames in their last 2 games. The Nuckleheads are slumping, having lost 4 of their last 5. Out of those 5 games, only 1 team was currently in playoff position, the other 4 were NOT, as you can see in my left sidebar.
Face it, we suck against sucky teams. I don't know if we just don't mentally prepare for the weaker guys or what, but it really chaps my ass.
Minnesota is a formidable opponent and an enemy of ours. So I would look for a great effort from Vancouver tonight (yes I'm sticking my neck out) and the Canucks pulling out a 3-1 win.

End of story. I'm not going to analyze this team now. They'll break out of this slump eventually is my guess. They overcame a slow start to the season so.....stay positive, Canucks fans.