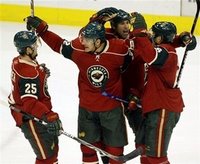 I think this game can be summed up pretty quickly, using very few words.

- shots: Wild 30 Canucks 20
- why? because the Canucks took too many penalties and played an uncharacteristicly undisciplined game. The Wild went 1-for-7 on the powerplay. The 2 powerplay chances the Canucks had were feeble.
- the Naslund-Sedin line looked schooled every time they tried to maintain any form of attack in the Wild's zone. The Wild flushed them out and stole the puck AND the Swedes kept being forced to turn the puck over. I'd also say they were not aggressive enough at times, and had no gel at all at other times.
- Niklas Backstrom looked bored.
- Ohlund was boo'ed all night. Haha. C'mon Minnesota, Canuck players are so likeable!
- Luongo was terrific again and got no support except from Mike Brown, who scored his first ever NHL goal, and Ryan Kesler, who showed more heart than every other Canuck player combined. Yeah, I'm a Kesler nut, so pardon the exaggeration.
I didn't mind Ohlund's play either.
-Who's that Voros guy? A goon with good hands. Yeah, he's good, and I like his emotion after he scores a goal.
- End of story. An off game. One to forget. Minny takes over the Northwest Division and they deserve that.

Hey Kes, at least YOU showed up today.