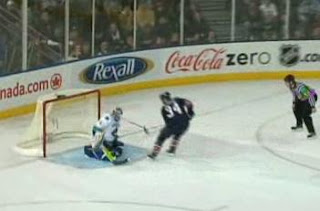 "We know that they got an unbelievable shootout record this year," Sanford said. "Garon and Roloson have been solid for them back there and they have some young guys that can put the puck in the net when it's just them and the goalie. You have to respect that and it gives you all the more reason to close it out in regulation time or the overtime."

The Canucks looked better last night and got stronger as the game went on but really didn't bury their chances. Garon is a Canuck-killer, in regulation/OT but especially the shootout. It seems that players are better to shoot high blocker side on Garon. Kesler did and it worked in the shootout. Garon seemed to leave that side open. But he just cannot be beaten along the ice, as he is way too flexible, as Ron and Don pointed out in Coach's Corner.
In front of fans and family, Jason Jaffray was given over 15.5 minutes of icetime and managed ZERO shots, but one fight against Steve Staios in OT. Too bad. He should have been given a chance in the shootout.

Just two months after serving a lengthy suspension for a hit on Rangers forward Ryan Hollweg, the New York Islanders forward is facing punishment time again after receiving a match penalty for trying to step on Jarkko Ruutu's foot.

"Trying". Did he actually make contact with Ruutu's foot? Did Ruutu sell it? I have no clue and can't tell from the highlights footage.
But Simon is a 7-time offender and 2 months ago served a suspension for using Hollweg's face as a baseball. TSN has a poll up on what fans think Simon's suspension should be. So far, they don't favor Simon's career in the NHL: 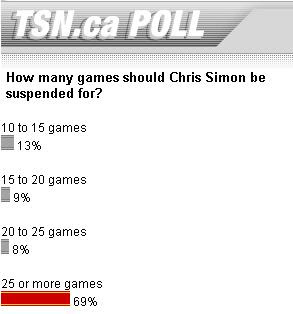 Bryan McCabe will miss 6-8 weeks as he suffered a broken hand injury against the Habs on Saturday night. Apparently his hand has 3 broken bones. Surgery is obviously 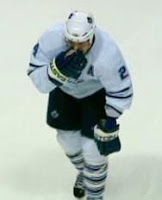 required.
Usually, I'd say this is a blessing for the Leafs team, and it still could be perhaps. But McCabe deserves some credit for the Leafs' recent success as he has elevated his game. Check out his stats over the past 10 games over at ESPN. At least he wasn't a minus player over the previous 8 games before last night's loss to Montreal. He was a minus 1 last night only because the moment he broke his hand, the Habs went down the ice and scored.

Random question: when is Ilya Bryzgalov going to recieve a painted mask or have one made up? His white mask sucks.

On the topic of goalies: can you believe the play of Alex Auld with the Bruins? Check out the difference in his stats playing for Phoenix compared to Boston.