Salo gets his groove back / Marc Denis put on waivers

Share All sharing options for: Salo gets his groove back / Marc Denis put on waivers 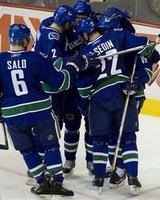 A great story behind the Canucks' 5-3 beating of the Flames last night was the re-emergence of Sami Salo. With Mattias Ohlund out with neck spasms, Salo had to step it up as Vancouver's go-to guy offensively and he delivered, with 24:37 icetime, 1 goal, 5 shots and a +1 rating.
Yeah we saw more of his shot, finally. That was only his 1st goal and 3rd point in 21 games this season. It has been a tough year for Salo. The oft-injured D-man broke his nose after taking a puck in the face in November and missed a considerable amount of time, only to come back wearing a full cage over his face. He was not on his game at all. He was almost a ghost out there.
Until last night. THAT is the Salo we are used to seeing, and want to see more of. It just took an injury to Ohlund to bring it out in him.
Salo may never play a full season, but his his totals of last year (67 games played, 14 goals and 23 assists and a +21) should be his target at his pricetag ($3.5 million per season through 2011). Let's hope he keeps rolling now.

The Lightning have placed goalie Marc Denis on waivers today. At a pricetag of nearly $3.0 million dollars, this could be the end of the road for Denis, who showed so much promise in Columbus, yet never materialized in Tampa. As TSN puts it:

Denis has one win in 10 starts this season with a 4.05 goals against average. He has not played in nine of the last 13 games and was a healthy scratch in three of the last four, losing his spot to rookie netminder Kari Ramo.

Keep in mind that Ramo struggled yesterday AND that Tampa's defence is ASS. Tampa's world could fall apart if they can't play better team D.