Some Americans just piss me off

Share All sharing options for: Some Americans just piss me off 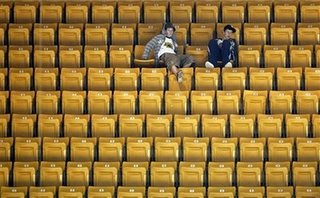 Ah, we have a bit of cross border controversy happening at the Battle of California that I would like to (hopefully) address in as few words as possible. Rudy Kelly has a ballsy, yet seemingly ludicrous post up about...well...blaming Canada for criticizing hockey in America, laughing at American hockey markets that fail, and pushing away potential hockey fans because we feel we are hockey superior up here and our attitude is not appealing. Here is an excerpt:

I’m not saying you’re (Canadians) not good fans, you guys are passionate and that’s great, but I’m starting to wonder if maybe you’re hurting the sport by loving it too much.
I think what I’m trying to say is that you guys are a more little focused on making sure hockey is still a "Canadian" sport than worrying about its health overall. Read this thread or this article and tell me that Canadians really seem concerned with growing the sport. You guys are acting like that one Biblical dude who would rather split the calf in half than let someone else have it. (What was his name… Jesus?) Look, if Nashville eventually has to move, fine, I get the economics of the situation… but you guys seem to be reveling in their failure, like it proves your hockey superiority or something. It’s not good for the sport if Nashville moves, no more than it was when Winnipeg and Quebec moved. The future of the game rests with the teams in the Southern part of the United States; if they fail, the league fails. I’m not sure you guys realize that.

The last 2 sentences have me cursing as does the whole article. The League will not fail if the southern U.S. hockey markets fail. That is a pompous statement. I think of it this way: would it really hurt your feelings if...say...4-5 American markets just disappeared and the League only had 26 teams? How about 20 teams? It wouldn't bother me one bit. That would maybe mean that the NHL failed to bring a successful brand of hockey to those areas I guess, but what is the bottom line here?
People are going to watch whatever the hell they feel like watching. Entertaining and competitive hockey/teams will bring people into the seats or into viewership in most cases. If that doesn't work, then fuck them! Move the team elsewhere. That's how I feel about Nashville. I'm not laughing at their failure and I don't WANT them to fail. It's just that they had a kickass team that was a contender and still couldn't generate enough revenue or fan base. So....what else is there to do? Try somewhere else or just fold your hand.

I do believe it was/is mostly American writers that were crying about the game being too violent and wanted to make the game more presentable to all ages. This is the other part that really pisses me off. We don't have to change the game because of certain failing markets to make it more appealing....as a last ditch effort to bring in more fans. The game should be played the Canadian way, the way it was in the early days. Bring back fighting and goonery. Yeah, people like that. Always have, always will. 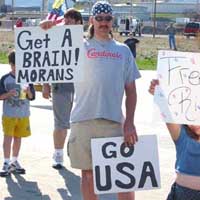 Rudy mentioned in his piece that hockey is not Canada's game anymore. As much as that angers me to even read it because the patriotic side comes out, I have to be realistic. Well it is our culture for one, and you will never have that, and secondly it isn't America's game either. I don't mind sharing the game with a country, as long as they don't fuck it up.

According to this ESPN source, through 16 NHL games this season, 5 of the 6 Canadian markets were in the top 10 in regards to game attendance. Edmonton was in 17th. We are not having any problems up here. Why? Because we love this game. Always have, always will. Some of you Yanks have football and baseball as your primary sports, yet you still want it all and cry about it when you don't get it. The American hockey markets that fail because of that fact can just go ahead and piss off right now. I don't care about you, and couldn't care less that your NHL franchise failed. Stick with your boring baseball.

I get the impression that you guys don’t really want hockey to succeed in the United States. You want to keep hockey to yourself, and you justify it by saying, "Well, nobody watches hockey in the United States, they don’t even want the game." I think I understand why, too; I’m not Canadian, so I can’t really pretend to know the national psyche, but I think you guys might be a little worried about being irrelevant. Hockey is what makes Canada unique on the global scene, and if you lose that then the only thing you’ll have left are moose and flannel. (Sorry, I couldn’t resist.) Is that accurate?

This is where I hate typing because I can't tell how serious Rudy is being here. But there is, from what I'm seeing, a dingbat American with that same ignorant attitude that Canadians and the rest of the world hate.
I don't know of anyone that wants hockey in America to fail. Personally, like I've already said: I just DON'T fucking care if certain American hockey markets fail. Canada has something, nationally, that America does not have and never will have: a love for the game of hockey. Can we love this game too much??? Fuck no! You cannot take this from us. Face it, we are bigger fans per capita than you are. Suck it up, kids. And even those who laugh at failing American hockey markets have the right to. It's a free country. Does that mean we are a little worried about being irrelevant? To some people, that may be the case.
But you see, I am a type A Canadian. I don't give a shit which country is more powerful (in every sense of the word.) All I want is a happy laid back lifestyle, where I can enjoy Spiced Rum and Coke while I watch Canucks/NHL hockey.
Don't feel so threatened, Rudy. Relax. Should I send you some Maple Syrup? Last time I checked, there were 10 American-born players drafted in the first round in 2007. So there is something right going on in hockey USA.