Of Canucks, Crosby and Niedermayer

Share All sharing options for: Of Canucks, Crosby and Niedermayer 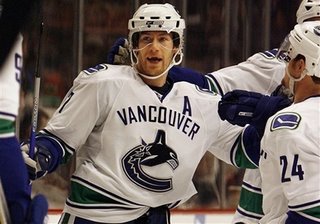 That was close. What a great game to watch. Lots of high tempo skating, some quality chances, and every goal except for Ohlund's 1-0 goal went off a skate, knee, or stick.
-The Canucks got into penalty trouble again, but the Hawks only went 1-for-7 on the powerplay.
-How about that....Morrison and Pyatt get 2 points each. Mo gets the winner. Nice line-juggling by coach Vigneault. It payed off.
-Byron Ritchie was a terrific spark plug tonight. As was Kesler...again.
-The Sedins-Naslund line looked mediocre again. Yeah, Naslund played his heart out, but the sisters look a bit 'off' to me. Hank took 3 consecutive minor penalties. Shorty talked about the Sedins being covered well, but I say they aren't skating hard enough and being too damned fancy with the passing. They are off their game more so than they are being 'tightly checked'.
-Losses by Minnesota and Colorado and Edmonton....wahahaha, we lead the Northwest Division again!!!
-Congrats to Naslund for surpassing Linden as the all-time Canucks leader in points.
I joked that it would be funny all of a sudden got a season-ending injury and then Linden passed him. Then Markus would be let go in the offseason...But that was not really all that funny. It's going to be a long damned time before someone passes Naslund now.
-Honestly, I am digging the Hawks. Any success they have this year is such a great thing. How can anyone NOT like what is happening in Chicago right now (unless you're a Wings fan)? Those kids are great to watch.

Good to see the Penguins coming west. When the Canucks game ended, I switched over to the Oilers-Penguins game. It was 2-0 Oilers about 6 minutes into the 3rd. "Geeziz, either these Oilers are that good or the Penguins are that bad" I thought to myself, when all of a sudden, BAMMO, the Penguins' explosive offence scores 4 unanswered goals in a 7-minute span. Crosby had 3 assists on the Pens' last 3 goals. Geez.... 4-2 Penguins victory.

That game will start at 7:00 pm PST as the 2nd game on the CBC double-header.

OK, so the defenceman that has "done it all" is returning to the Ducks' lineup. The Duck fans are screaming "Ducks: 2008 Stanley Cup champions!!!" already. But you know what? Fuck that! Sure, Needs will make the Ducks better. But the Ducks do not have the same team as last year. They will have different team chemistry as a result. And they have..Todd Bertuzzi. Bertuzzi is not winning a Cup on my watch. I guarantee it!
Screw Niedermayer, the ignorant, indecisive jackass, and screw the Ducks. They can quack their asses to the bottom of the standings for all I care.
It is the time of the Canucks, people. Yes it is.