Life is so good in Canucksville

Share All sharing options for: Life is so good in Canucksville 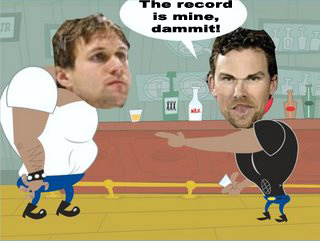 What a great game last night. A shalacking. An ass kicking.
The biggest story of the night was the Sedins breaking out finally, scoring a combined 4 points. It seemed like Nashville didn't check them as hard as the previous teams had. But it also seemed like they were skating and playing their game at 100%
The other story was that Linden, at one point, had an assist on Burrow's goal, tying him with Markus Naslund as the All-time Canucks leader in points. Then Naslund and the Sedins ripped it all up in the 3rd period and Naslund had 2 assists. Then it was Linden who scored in the empty net to make it 5-2. Now I see that Linden's assist was taken away.
I guess that puts Naslund up by 2. But I have a thought here. How much does Linden value this record? Maybe Vigneault could have a bit of a healthy competition between Naslund and Linden here if he'd let Linden play more games. That would be a positive wouldn't it? Put a little jive in Linden's stride perhaps?
One thing is for sure: it is a mother fricking great time to be a Canucks fan right now as they are on fire.
Bring on the damned Penguins! We'll send them back to filthy Pittsburgh in a 'wah'mbulance. Obviously the Albertan teams can't stop Crosby, so we'll take care of that. Clean up their mess kind-of-thing.