Share All sharing options for: Ducks trade McDonald to Blues for Weight 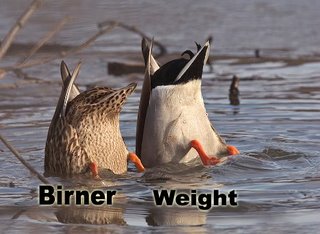 The Ducks also receive Czech prospect Michal Birner and a 7th-round draft pick in the 2008 NHL Entry draft.
I was expecting Brian Burke to trade a defenceman, as he was proclaiming that every defenceman was up for grabs except Pronger.
The 2 teams acquire struggling centers and hope for better results. McDonald only has 4 goals and 12 assists in 33 games. He is not the same without Selanne and had not clicked with any other Duck.
The aging Weight only has 4 goals and 7 assists in 29 games.
McDonald has already played with Kariya a few years back with the Quacks. He is earning $3.33 million per season and has another year left in his contract.
Weight, who makes $3.5 million this season will become a UFA this summer, and will probably be used to jumpstart Todd Bertuzzi. Bert the Floating Futile only has 8 points in 19 games with the Ducks.
I like this deal for both teams. But I don't like to see the Ducks keeping Schneider. That is one wicked blueline group. Too good.
So who is this Michal Birner kid? He was drafted 116th overall by the Blues in 2004. The 21 year-old Czech put up great offensive number in the OHL, but has that has not translated with the Blues' AHL affiliate Peoria.
Hockey's Future has this to say about Birner:

Birner is a good skater, and has the ability to stickhandle in traffic. He is sometimes guilty of playing too much on the perimeter, but his quickness enables him get to the net or open scoring areas in a hurry. His shooting skills are adequate, and he is considered a smart passer. Birner must continue to elevate his awareness when he doesn’t have the puck.