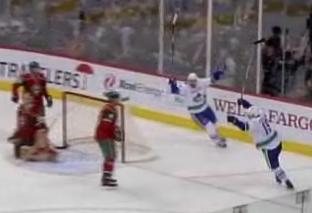 Well, it's -15 up here with a wind chill. So I'm not complaining about the game being on so early. This afternoon's game has many storylines to it.
The Canucks have owned the Wild this season so far, winning both games and outscoring the Wild 10-4 in the process. Markus Naslund has 4 goals including a hat trick in the last game.
-The Canucks are 4-14 on the powerplay against the Wild this season.
-The Wild are 2-for-7.
-The Canucks have outshot the Wild 57-42.

But the big story for tonight in snowy Minnesota isn't necessarily how much of a dickhead Boogaard is going to be. It's whether or not/how much longer Roberto Luongod can keep this shutout streak going. He is currently on a career and franchise-high 193 minutes and 56 seconds.
But Canucks.com is echoing my sentiments somewhat. Marion Gaborik is rolling right now. He has scored goals in his last 5 games spanning back to when he last played against us. Let's see if the Canucks can play disciplined hockey and how well Kesler can annoy Gabby and keep him in check.
Vancouver and Minny have the exact same record: 14-9-2, with the Canucks having the edge for top spot in the Northwest because they have scored ONE more goal than the Wild overall. Unreal. So top spot in the NW is up for grabs tonight, as the Western Conference continues to be a war. I don't think I've seen standing this close before.
You gotta think that the team is rallying around Luongo's cause here. I'm wondering if Luongo's shutout streak comes to an end early on in this one and the wheels fall off the Nucks' wagon costing them the game.
I am thinking that the Wild do just that and win this one 3-2. They are due.
I am also thinking that Roberto is off his game. Check out the clip below:

Game Time: 3:00 PM Pacific
TV: Pay-per-view. Hurry up and order it before the phone lines jam up!