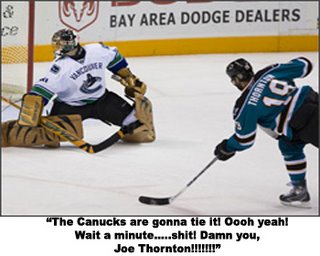 Unfortunately, on the seventh game in the seventh city in a span of twelve days, the Canucks just didn’t have enough gas in the tank.

Yeah, whatever. Let's stop making excuses here. That would be an insult to the Sharks more than anything else. These guys are well-paid athletes. They have not played enough consecutive games to used the 'tired' excuse. I thought San Jose played a great home game and shut us down.
The Nucks could have came back in the 3rd, and were well on their way in doing so until another turnover costed them again, and Thornton blasted away a coffin nail.

"Out of five goals, four of them were mistakes, and you can't play like that," said Mitchell, who got dusted by Michalek on San Jose's first goal. "Against a team that good, you can't make more than one mistake."

The Sharks executed their game plan to near perfection.

"It feels good we got some wins at home, and it's going to continue like that," Milan Michalek said. "We were talking about it before the game, (how) we had to come out hard on them because they played the night before."

Yeah, so much for the Sharks' home ice issues. 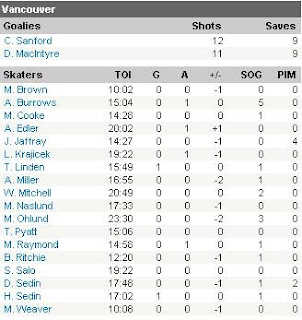