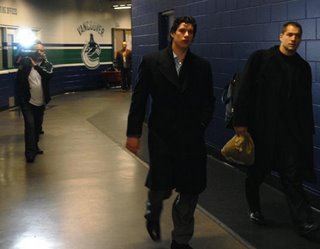 The storyline to the Canucks-Pens game tonight has a small new twist to it. Marc-Andre Fleury has a slight ankle twist and will not play tonight. But Dany Sabourin will. Should we fear the Sabs? Well, you never know. He will be very motivated.
So the Great Crosby has arrived and excuse me while I puke for minute.....................................................
OK, I'm back.
Not a big fan of The Kid. But he is growing on me a little. He is playing with more determination and more physically this year it seems.
I can't remember the last time the Penguins came to Vancouver, so I am really looking forward to this one. The fans at the game and who watch it on TV are in for a treat.
Remember what Mario Lemieux did to us before. He'd make us look stupid. It's goal #5 on this clip. The Pens' announcer cracks me up there: "The puck is in, and I don't know if Kirk McLean wants to cry or wind his watch!"
Damned Penguins, I hate them. Always have. That is why I am just hoping the Canucks can put together a solid effort tonight and shut Crosby & Co down. We are better than them defensively. Our goalie is god. We have to stay out of penalty trouble tonight because that would be playing with fire against an explosively offensive Pens team that is ranked 8th in the NHL, and was 2-for-7 in their games against Calgary and Edmonton, both wins.
In those 2 games, it was Evgeni Malkin who scored more points than Crosby: 2 goals and 2 assists.
Calgary actually kept Crosby off the scoresheet a couple nights ago.
As for the Canucks, we have good news in the fact that the Sedins broke out for a combined 4 points last game against Nashville. I would expect that the Pens aren't going to shadow them as well either, and that our top line will be good tonight.

So what will it be?
1. An undisciplined effort by Vancouver and an easy Pens win?
2. A Canucks schooling in defence for an easy win?
3. The Crosby Show?
4. The Sabourin Show?
5. The Luongo show?
6. A high scoring nail-biter that ends in a shootout?

Sit back and enjoy the ride. It's going to be a rough one with lots of end to end rushes. A goaltending duel of master versus the apprentice that got fired.
It's Kesler versus Crosby, Laracque versus Cowan, Malkin versus Morrison
and it's coming up on Hockey Night in Canada in high definition. Woo!

Crosby press conference (Canucks.com) Or what I like to call: watching paint dry

Hockey blogs from fans that have no taste (Pens Fans):

The Crosby in Vancouver image is from Canucks.com