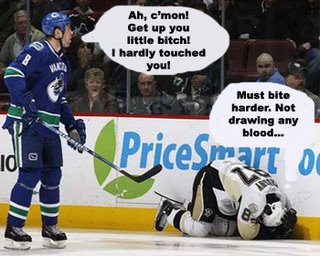 Yeah, I'm still mad about the Nucks' loss to Pittsburgh. And yes, I still hate Crosby, and anyone who wears a Pens jersey (except Gary Roberts).
Anyway, I just need to get over it. A win tonight over the Kings will help ease my relentless anger.
The Canucks are back on the road to California to take on the Kings, Ducks and Sharks. The Ducks and Sharks games are on Wednesday and Thursday. Busy week, because they end their road trip in Edmonton on Saturday night and return home to play the Devils the following Tuesday.
So let's see how much resolve this bunch has on a busy road trip. And let's see how much resolve they have after losing a heartbreaker to those fucking Penguins.
The Kings are on a bad slide. They have lost 4 of their last 5, and are 3-6-1 in their last 10 games, securing a spot in the Western Conference basement.
The Canucks are still leading the Northwest by 2 points over Minnesota, and hold 2nd place in the West. Both teams have played 29 games.
The last time the Kings and Nucks played was October 18, when the Canucks were in their rough start. We outshot the Kings 28-17 and lost the game 4-2.
What can we expect tonight? To be honest, I foresee a motivated Kings team and a Canuck team that is slow out of the gate. I can see the Kings getting ahead early and the Canucks battling back....but it will be too late...Kings win this one 4-3.
Feeling a little pessimistic right now.
Oh well, Go Nucks! 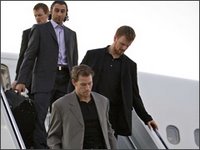 The Canucks land in L.A. (photo from Canucks.com The team has a photo-road diary going on for their road trip. Some good picks there.)