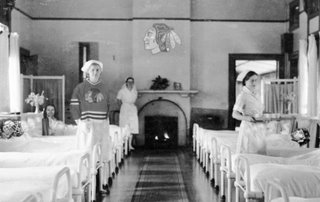 It appears that Hawks Hospital is almost empty for the time being (except Rene Bourque and Kevyn Adams, and possibly Jason Williams). With Martin Havlat and Patrick Sharp back in the lineup, the Hawks are looking deep up front and are a serious scoring threat still.
The last time these 2 teams played, Luongod and the Nucks shut them out 2-0 and Luongo went on a shutout spree. But Sharp and Havlat were not in the lineup. In fact, both Havlat and Sharp returned the next game. Chicago has played 3 games since we shut them out and have obliterated 2 opponents: Tampa Bay (5-1) and Phoenix (6-1), and lost to the Blues 3-1 in their last game on Saturday night. In those 3 games:
-Some kid defenceman named Byfuglien had 4 goals and 2 assists, including a hatrick.
-Patrick Kane had 5 assists.
-Jonathan Toews had 2 goals and 2 assists
-Patrick Sharp had 1 goal and 3 assists
-Martin Havlat had 2 goals and 1 assist.

It's amazing how much confidence Havlat brings to the Hawks team.
I think it's fair to say that a 2-0 win probably won't happen here. However...

The Canucks are coming off a dismal 2-1 loss to Minnesota. A game which they were outhustled, outchanced, and showed no discipline at all. The only bright spots were Luongo, Kesler, and Mike Brown. I would expect a different, more disciplined performance from them tonight. But jeeziz, they are going to have to match Chicago's speed and/or slow the Hawks down a bit.
Look for the Sedins and Naslund to have a little more room tonight and contribute. They had better. Bunch of floaters....
I say the Canucks take this one 5-3.

PS: Hey, I know other sites have found this, but there is actually another Hawks blog out there that isn't Wirtz Sucks (now called BlackHawkZone). It's called simply, A Chicago Black Hawks Blog. Go ahead and spam the guy, Canucks fans! haha. Seriously, welcome to the fray, Kaiser.

PPS: Isn't it amazing how offensively futile Sergei Samsonov continues to be? 4 assists in 19 games this year. He shows a lot of flash, but no finish. Kind of reminds me of how Bertuzzi was in his last year with Vancouver....except he's half Bert's size. Samsonov can rush the puck into the zone and do laps around the opposing team's net but generate nothing.
Someone in my comments section had mentioned that Recchi would fit in Chicago's mold. Maybe Samsonov should be put on waivers and the Hawks claim Recchi. It's hard to believe that a talent like Recchi would be forced in to the minors while a tit like Samsonov still has an NHL job!!! (Update on Recchi: He has cleared waivers. Unbe-fucking-lievable.)

-Trevor Linden is 1 game away from 1100 games played as a Vancouver Canuck.

-Markus Naslund needs 1 point entering tonight’s game to surpass Trevor Linden for the franchise record for most points. Both Linden and Naslund sit at 724 points all-time as Canucks.

-Mattias Ohlund needs 1 goals to tie the Canucks’ franchise record for most all-time goals by a defenceman, currently held by Jyrki Lumme who had 83 goals in a Canucks uniform.

-Matt Cooke needs 8 points to reach 200 career NHL points, all with the Canucks.

Check out the piece called "Numbers" under that Canucks.com link. Good stuff.

I wouldn't mind seeing Linden play tonight instead of Jeff Cowan. Linden has been a healthy scratch for a few games now.