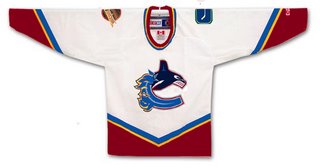 There is questions as to who will start in goal for Vancouver tonight, as it is a back-to-back game situation. Well Rotowire has pointed out that the Vancouver Province is saying that Roberto Luongo will get the start. I don't see where it says that. But it does say this:

This reflects my Ducks post game. When we get the lead, we are usually gold. Love it. I'm glad there is no Felix Potvin or Jan Hlavac or even Jyrki Lumme out there to screw things up.
As I pointed out in the last post, the Canucks have won 5 and lost 3 when playing the second game in a back-to-back situation.
So what can we expect tonight? I'll tell you my hunch. I pick the Flames to win this one. It's in Calgary. We won by an unusual 5-3 score over the Flames a few days ago, and Miikka Kiprusoff was given the hook. Expect a rebound performance from him, and the revenge factor from the whole Flames squad. It will take a majorly spirited effort from Vancouver to pull out a win in Calgary. 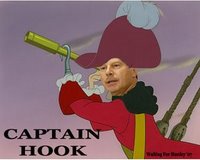 It is great to have Ryan Kesler back as he can do it all....especially check. Maybe he should shadow Iginla tonight. The usual Iggy Pest named Mattias Ohlund is not playing again tonight because of his neck issues, as reports the Province.

"I got hit on the first shift against New Jersey and had my head jammed against the [corner] glass," said Ohlund, who has been experiencing neck stiffness and headaches. "I played a few more games, but I didn't feel good and things are not were they're supposed to be."

Remember when Ohlund and Iginla fought in the 2003 playoffs? Check it out. If Flames fans hate Ohlund I could see why. Dirty bugger. But hey, he's OUR dirty bugger, and Phaneuf is a homo. Haha.
3-2 Flames in a shootout tonight. Anyone top that?
That's my call. Fear the 'dreaded' Iginla-Conroy-Huselius line. Conroy was promoted to the top line in the Flames' last game against the Ducks and responded with 3 assists.
By the way...Happy New Years to all of you. Have a great night. I'll tip my glass of Captain Morgans and Coke to each and every one of you. See you in 2008.