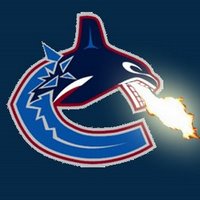 Ah, back to Canuck hockey again. Feels like it's been a long time. Both Vancouver and Calgary have not played since December 23. Both teams lost on that date (Calgary lost 1-0 to the Devils, and the Canucks lost 3-1 to the Avalanche)
We have played the Flames 3 times already this season and have won all 3. Those were back in October and November. A lot has changed since then. For one, the Canucks have become a better team.
However, the Flames have become considerably better more recently. While Vancouver is 5-3-2 in their last 10, Calgary is 7-0-3. Yeah, no more Keenan-bashing is being heard. He's got them playing great hockey in front of an improved Miikka Kiprusoff. Suddenly, the joke that was Calgary is now only 3 points behind us.
Part of the Flames hot streak can obviously be credited to Jarome Iginla (6 points in his last 5 games, yet 0 points in his last 2.) But how about Kristian (The Weasel) Huselius? He has 8 points in his last 5 games played and zero in his last 2. The secondary punch of the Weasel is very key to Calgary's success. He is now 2nd in 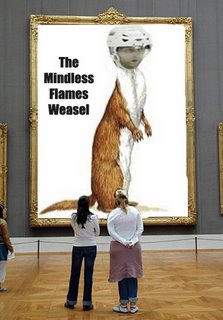 team scoring with 14 goals and 35 points in 37 games.
And how about Adrian Aucoin? Prior to Calgary's 1-0 loss to the Devils last Sunday, the former Canuck had seven points (2-5-7) in the previous five games.

-Canucks: We know the IR guys. But Mattias Ohlund missed Vancouver's last game with a sore neck. He is questionable for tonight.
-Flames: Gandalf the Grey...I mean...Owen Nolan has a sore neck as well. He has missed the Flames' last 3 games.

This is a tough call. Should be a great game between 2 divisional rivals. Will the Canucks contain Calgary's speed? Don't I always say that? If this were in Calgary, I'd call a Flames win, but it's in Van City, where the Nucks have won 4 straight, and Luongo has been red-hot. So I say the Canucks snag a 4-3 win with home ice advantage, and Luongo saves our butts.