Check out the highlights of the last time the Ducks and Canucks played where the Canucks won 4-0. In order for the same thing to happen again, a few things are going to have to occur:

1. The team has to play well in front of Sanford. He lets out a fair bit of rebounds, and he is not Luongo. Luongo was the big story of that 4-0 win, stopping 15 shots in the first period before the rest of the guys even showed up, and stopping all 26 shots he faced. So was Kesler, who had 2 power play goals.

2. I don't know if the team had a bad case of the shits in L.A., but they all played like their diapers were full. Uninspired. Sloppy. Sluggish. I do expect a better effort against the Ducks. 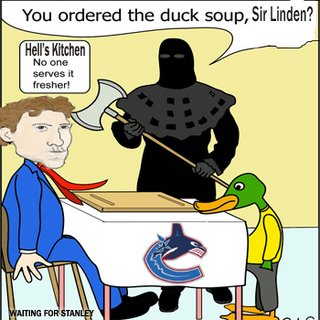 3. Secondary scoring. The Sedins are off their game lately. They are losing battles along the boards, getting roughed up, and making stupid little fancy passes that are getting intercepted too often. That needs to stop right now. Play with some heart, you floaters! Until they stop being wimps, someone else has to step up.

4. One commenter here suggested that Morrison may miss the game against the Ducks with a wrist sprain. He was sent back to Vancouver for evaluation.
Brad Isbister may miss the next 3 games due to a pulled hamstring, suffered against the Kings. So if those 2 don't play, Mason Raymond and Jason Jaffray will. Hey, fine by me. Anything to light a spark under this teams' collective asses. (I can't fault Pyatt right now, who seems to be on a bit of a roll.)

5. Stay the hell out of penalty trouble. Once again, Sanford is not Luongo, and the Ducks have some mean fire power from the point.
Which reminds me: is that no-brained indecisive twit Scott Niedermayer making his debut tonight? And if he does, can someone please whack that shit over the head with a blunt object? It may help his thought process along a little. 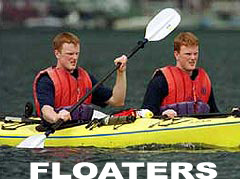 So what is my prediction for tonight? Well, you ain't gonna like it. It should be pretty feisty, as last game was. I think the Ducks will be motivated to avenge the 4-0 loss we handed them a few weeks back, and the Canucks will be motivated to put the last gutless effort aside.
But I just can't get over the fact that it's Sanford in net, and that the Sedins look and play like they are 50 pounds lighter. Expect penalty trouble from the Nucks.I say the Ducks take this one 5-2. Any other takers out there?
I will praise Sanford's name and declare him holy if he steals this one!