Share All sharing options for: Canucks-Devils Preview: Luongod against the Devil Brodeur 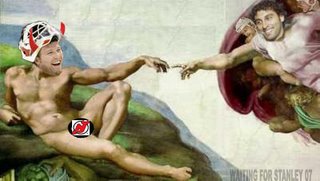 It's not very often that Canuck fans get to see the Devils play in Vancouver. It has not happened since December 29, 2001, where we beat them 4-2. I don't even remember that. But I do know that Jan Hlavac had 2 goals and Peter Skudra was in net for the win.
The main focus tonight will be on the goalies, as the 2 best (arguably-not) go head-to-head. Canucks.com has some crazy stats on Martin Brodeur:

I can't find anywhere that states Luongo's record against New Jersey. Can anyone help me there?
The Devils were red hot as soon as Jamie Langenbrunner had returned but have since cooled off, winning only 2 of their last 5 games.
The Canucks are faring worse, having lost 4 of their last 5.
You could say that both teams have scoring issues, as both are in the bottom half of the NHL in goals for. Yet their goals against is in the top half of the League.
So we could be looking at a low-scoring affair here.

Don't blink, Nucks fans, but we are 4 points from being out of a playoff spot. The team will trudge forward without Brendan Morrison, Brad Isbister, Jeff Cowan and Kevin Bieksa. Markus Naslund is battling the flu but should play.

The Devils are healthy, minus only Jay Pandolfo and Cam Janssens. (Thank god, no Janssens. He's a beast.)

So let's see what happens tonight. It's 2 teams that play the same and have superb goalies. Regardless, I say this game ends 2-1 in Vancouver's favor, as they return home 'rested'.

Hate to say it, but I am a big Zach Parise fan. The kid has skills that we will see first-hand tonight.

Luongo on his ribs:

"It feels good, I didn’t have any issues when I’m on the ice, so that’s a good thing. I was able to get through practice with no discomfort and no pain, so it’s really feeling good. Hopefully I’ll stay on top of it and it won’t get worse."

ENEMY BLOG FROM HELL: 2 Man Advantage. Actually, you really gotta check that site out. It's really picked up and has Photoshop skills. 2MA's Joe Bechtel has the Devils winning this one 3-2 in a shootout. We'll see about that. If the game does go to a shootout, I have no faith in Vancouver scoring more than 1 goal.