Still don't have time to do up an in-depth pre-game post.
The Canucks have won both games against the Avalanche this season so far. But combine a hard-fought win over the Coyotes last night with their super ability to look tired after consecutive road games and the possibility of Luongo taking the night off (my guess, but maybe he won't because of the Xmas layoff), and here's what you get: 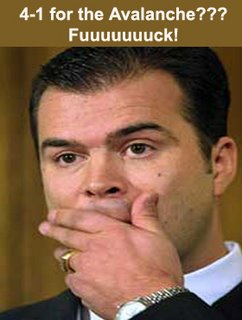 Who knows, though. The Avs do not have Smyth or Sakic in their lineup.
If the Avs win, they tie us in points, but claim #1 spot in the Northwest, as they have played one less game, and have scored 10 more goals than us.
It's going to be a great game.